Project:
Internal and external repair and refurbishments of a Grade II* Listed country house
including the construction of a large basement for wine storage and leisure activities

Over the front door is a Latin inscription: “Parva sed apta domino” that is, small but fit for the owner, or possibly the Lord, for the house began and ended life as a vicarage. In the late 17th century, however, it was leased to Thomas Pitt, for the occupation of his wife while he was making his controversial fortune – and annoying the East India Company – in India.

According to B.D.Henning in The History of Parliament, 1983, Pitt ‘died on 28 Apr. 1726, on the worst of terms with his entire family, except one grandson, “a hopeful lad”, who became prime minister and Earl of Chatham.’ However, a warmer personality is expressed by his house, which reverted to its use as a vicarage, before being sold by the Ecclesiastical Commissioners in the mid twentieth century. Behind it can be seen Old Sarum.

Unusually for a building from this period, the property was in an incredibly fragile state of repair. After encasing in a temporary roof, the roof was stripped of tiles and the timber roof structure was substantially rebuilt. Internally, the structure was carefully repaired and restored, including the replacement of a significant proportion of worm-eaten timber. All failed historical lath and plaster finishes were replaced using traditional methods to comply with the Grade II* listing. Natural sheep’s wool was added to improve the insulation properties of the house including a clever secondary glazing solution to fit within the 18th Century stone mullioned windows. Double glazing was also included in the replacement sliding sash windows, manufactured using traditional methods in our joinery workshops. This was considered quite a coup with the local planning department. 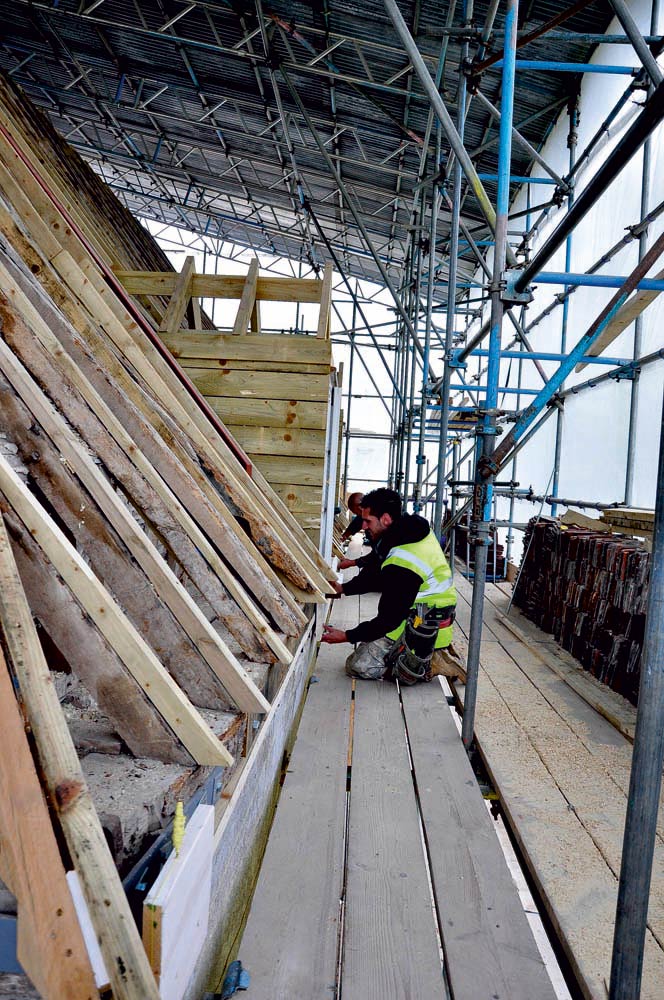 “Most of the existing timber structure and all the plastered finishes had reached the end of their lifespan. Working very closely with the local Conservation Officer and structural engineer, we had to carefully piece back together the building. The excavation of the large basement beneath the house was the largest challenge. Not only did we have to consider the high water table, but the ground beneath the existing structure had to be pressure injected to provide extra stability before any digging could safely begin.’’

A large cellar was excavated below the main living room. Given the height of the water table and the fragility of the structure, this work required very complex engineering solutions to dewater the site and stabilise the ground beneath the house.

Modern and high-tech plumbing and electrical services were threaded within the multiple levels of floor structure to provide the new owners with a sophisticated and modern 21st century living.